Â Fall has approached us.

((Just a bit of cross posting from my other site: ModernHanafuda.net. October is my favorite month in the year and I think it turned out really well.))

The month of October is known asÂ KannazukiÂ orÂ KaminazukiÂ (ç¥žç„¡æœˆ, “Month of the Gods” or “Month Without Gods” depending onÂ which part of Japan you live in. However, this seemingly major motif or cultural (Shinto) phenomenon has no bearing on the iconography of the October suit in hanafuda. ThisÂ surprisedÂ me at first but then I realized, “What plant is Japan arguably most well known for in Fall?” 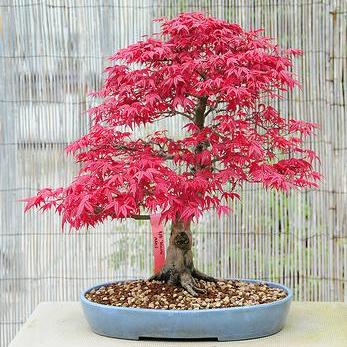 If you answered the Japanese Maple, you’re right! At least according to my book and the hanafuda suits. The photo above is aÂ bonzaiÂ of my favorite cultivar of Japanese maple calledÂ Acer palmatum var. atropurpureum ‘Bloodgood’Â or more commonly called a Bloodgood Japanese Maple. It is one of my favorites because of the rich red-purple leaves it produces. The colors it sheds are just stunning both in picture and in real life!

However, I wanted the color themes to slowly change between the months to month so I added orange into the mix of the cards. Originally I had the branches or stems of the leaves as brown but that made the deer not surprising enough. I tried black, but that made the card feel like a shattered mirror since the edges of the final cards are also in black. Finally, I used white which gave the reds and oranges the opportunity to pop out as only a vibrant autumnal forest from Japan can be. In this suit, we have our second of three blueÂ tanzukiÂ and glass chime combo. For a refresher on my inspiration for this crazy combination,Â check out my July posting. This particular glass globe is sporting two overlapping Japanese maple leaves with the white part as a sandblasted etching. To be fair, I am not even sure you can sandblast a glass Furin chime thusly. Perhaps one day, if given the opportunity, I will be able to have the Modern Hanafuda chimes custom made. If you would be interested in purchasing a chime, let me know in the comments section down below. If enough people are interested, perhaps we can explore this territory further! 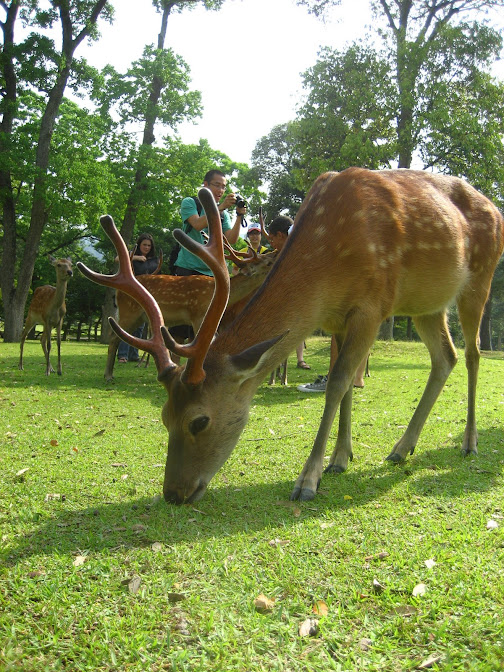 Last but not least is the deer card. For this card, I wanted the people playing to be in the forest among the changing colored leaves and suddenly stumble upon the stag as he silently makes his way through the forest. True story. The stag is actually from a photo my friend took while he was in Nara, Japan. We took the same course in college but attended the Japanese exchange program at different times. A special shout out to Keebler for the assist!

October was one of the hardest months for me to complete and I am still not 100% satisfied with the design. Ask any designer to look at their work a year later and they will no doubt be very critical of their work. Perhaps with future printings of the Modern Hanafuda decks I will incorporate some Shinto elements into the design. For now, I hope you enjoy the scene as it stands.

Posted in Graphic Design and tagged art, hanafuda, kickstarter, modern hanafuda, october. Bookmark the permalink. RSS feed for this post. Comments are closed, but you can leave a trackback.